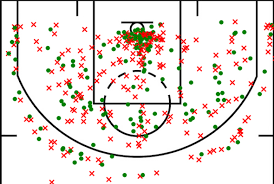 How much detail each coach wants to know about his players” FG%’s varies tremendously from coach to coach.  I would venture to say that at the NBA level there is much detail and in general, as one goes down the ladder from the NBA to college to high school, there is likely to be a sliding scale of detail due to a lack of time and possibly budget.  Again, if the head coach can’t tag possessions post-game (he certainly can’t in-game), the process needs an assistant of some kind who is dedicated, knowledgeable and trustworthy.

Certainly, of all the analytical tools available to help coaches, the knowledge of where each player’s shots originate as well as the type of shots taken and the corresponding FG%’s of each is perhaps one of the best tools a coach can have in his tool box when it comes to reinforcing the principles of shot selection.  Let’s break it down some:

Now comes the interesting portion of the analysis.  Since Player A shot .413 on 3pt FGA’s, his effective overall FG% on those attempts was .626.  A real question for a coach becomes why would Player A take any other shots except triples and layups (.600)?   This type of rationale is becoming increasingly popular at all levels and has helped fuel the decline of the mid-range game.  On all other attempts besides triples and layups, Player A shot .442, which is obviously vastly inferior to his numbers from the arc and at the rim.   Of course, Player A’s coach might rightfully defend Player A’s 104 mid-range shots by saying either that “he took what the defense gave him” or that those attempts “made the defense more honest”.  The bottom line, however, is whatever side of that argument you want to take, you can only take it if you know your players’ FG%’s from all areas of the court.

There are other by-products of knowing these stats.  In individual player meetings, one can utilize the numbers as proof that certain shots are considerably less efficient than others or a coach can create more drill work on mid-range J’s and runners.

The charting and analysis of Player A’s two point FGA’s is important, but the analysis of his 3pt attempts is considerably more important because quite simply that 61% (271 of 435) of his points off FG’s came off triples. Since he is just a prolific producer from beyond the arc, we need to have great detail to help him maximize this talent.  (Keep in mind that his free throw numbers were also created inside or outside the arc and we can roll those numbers in also).

So, first we might analyze his 3pt FG% by area of the floor.  One can divide the floor into fifths so essentially we would have two “corners”, two “wings” and a top of the key.  Hypothetically, let’s say Player A shot:

These stats tell us, among other things, that:

Lastly, we might analyze player A’s shots by category:

As important as in-season/in game FG% analysis is, perhaps charting shots in 5 on 5 competitive practice as early as the first week of pre-season practice is even more valuable.  Let’s say, for instance, that in the first week of practice there might be 5- twenty minute periods of 5 on 5.  That sample size alone is large enough for a coaching staff to use the data to illustrate to players various teaching points (“inside the arc, you were 12-18; outside the arc, you were 1-9.  1-9 doesn’t win games!”  Sooner or later, even the most stubborn players will recognize that the numbers don’t lie.  Or, the staff can focus on deficiencies in practice as early as the first week based on real statistical analysis rather than hunches and guesswork.  One can continue to use FG% analysis by category the entire pre-season so that when you get to the actual games, you’ve laid a lot of valuable groundwork.

Whether one uses type of shot and area on the floor FG% analysis in practice and/or games, the coach who does so will have a better handle on his players’ shooting tendencies and while the process might be a bit tedious, the payback might be the competitive edge necessary to notch two or three more victories.  Small edges can make a difference.  By way of anecdote, a current NBA agent was recently quoted on the topic of analytics, “…it’s like painting by numbers.  And you can’t paint a masterpiece by the numbers.”  To which I would argue, “you don’t have to paint a masterpiece, all you have to do is win by one point.”