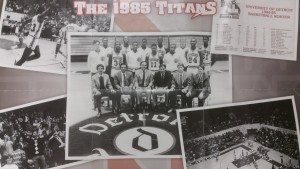 Like many of you, over the years I had many assistant coaches and like anything else, they have run the gamut- from the great-the late Charlie Coles, who had a stellar career as a Head Coach at Central Michigan and Miami of Ohio-all the way down to a coach I had to dismiss after only a week.

Also, like many of you, I assigned responsibilities commensurate with each individual’s experience and expertise.   The goal was always to make sure that all assistants eventually performed all the duties necessary to one day be a head coach themselves.

At the HS level, I was fortunate to have several seasoned veterans as “right-hand men”, who had previously been successful head coaches in their own rights.  I also had several excellent ex-college players who knew the game very well and just had a natural flare for teaching and communicating with players.  I also had a number of teachers who had backgrounds in athletics and had an interest in coaching.

At the college level, besides Coach Coles, I was again fortunate to have a number of outstanding assistants, and I would be remiss if I didn’t mention at least two of them- Milton Barnes, who became the head coach at Eastern Michigan-among other notable stops-and Derrick McDowell, who was on staffs at Central Michigan and Eastern Michigan and who, most recently coached the Detroit Western International Cowboys to the Michigan Class A State Championship this past March.

Obviously, the types of duties and assignments varied greatly at the two levels.  At the high-school level all positions were part-time and no one derived their main income from doing so.  Most of these assistants were interested in the “game” and in performing actual coaching duties in practices and games.

On the other hand, most of the assistants at the college level were full time-even if their job descriptions said Part-Time.  Their incomes were pretty much derived from coaching and related duties- camps, clinics, speaking engagements etc.  The duties at this level tend to be more varied and consequently some assistants actually had more “non-coaching” duties than not.

Generally speaking, at the college level, I wanted more help with recruiting, academic monitoring and office administration than I did with coaching.  Certainly, my assistants were all involved to some degree in practice planning, actual practice, game-planning and post game analysis.  Rightfully so, I leaned on my “star” assistants for more “X and O” input than others.  But, in retrospect, no matter what my other assistants’ non-basketball duties were, I easily could have better structured a format in which they could have had more meaningful input.

So, here’s what I would do now: (This list might be more applicable to a college situation but decide for yourself).

As I now have involved my assistants either in the planning or execution of everything that we do, they should be more invested in my program and theoretically more engaged and motivated.