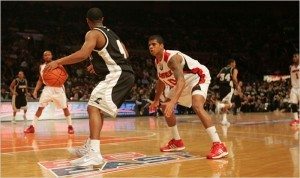 Today, we’ll add some thoughts on handling several other double teams. When we discussed Diamond Press doubles in our last article, we operated on the premise that our hypothetical double teams are very good and our ballhandler just can’t simply beat two men off the bounce (even though that obviously occurs and if/when it does, we’re staring at a 5 on 3, rather than the 4 on 3 if we pass out of it).

BOX PRESS or the 2-2-1: Like any offensive or defensive action, there are infinite variations to the 2-2-1 depending on the coach implementing it and his personnel. But, for today’s purposes, we’ll choose three general approaches to the Box Press.

VERY SOFT- The coach using this variation has his team line up in a 2-2-1 set at ¾ court and as the ball is being advanced up the court via the dribble and/or the pass, the press is retreating back in relation to the offense. If this 2-2-1 is truly “very soft”, there is little or no attempt to pressure the ball. It is a very safe press and if the offense does turn the ball over, it’s generally of the unforced variety. This type of box press is designed to slow a team down, rather than speed them up. Sometimes offenses will inadvertently turn the ball over with a ten second violation because they advance the ball too slowly. One note on this variety, teams that run this can also be “setting you up” for double teams later in the game. The advancing ballhandlers should have that thought in the backs of their minds. As simple as this sounds, a ballhandler can face 0, 1 or 2 defenders; one obviously advances on 0, and advances on 1 but has to be ready for the trap. Last, one should avoid 2 defenders whenever possible-but prepared to handle when it can’t be avoided.

OPPORTUNITY TRAP: The coach using this variation will have one of his front two men (usually guards) slightly pressuring the ball and perhaps even forcing the ball to the side. This coach really tries to keep the ball out of the middle and assigns either the off side guard or off side forward to deny or discourage your middle option. What this style really wants is a double team if you do take the bait. Whether you use a one man front or a two man front to attack, this press really wants you to use either sideline. On the other hand if you avoid the trap, they want you to reverse the ball at least once and twice ideally. Avoiding the trap increases the chances for ten second calls and really slows the tempo. Keep in mind that against this variation of the box press, you can force the tempo yourself, if you want, and purposely invite the trap to have the chance for a 4 on 3.

HARD TRAP: The coach using this 2-2-1 style wants to really pressure your guard toward the sideline and force a trap there with their forward. On this double as well as the double out of the man to man and the run and jump, the defense is attempting to SPEED UP your dribbler. Your dribbler has to combat this by speeding up and slowing down when he WANTS to. This keeps him under control as well as making it more difficult for the defense to time its double. On this trap (which is the same as the opportunity trap above), the ballhandler can anticipate and see the trap coming. Any time your ballhandler can anticipate and see a trap coming, he can actually avoid the double team by having the trap commit early. The ballhandler can create an early commit by a change of pace dribble, a stationary dribble or even dribbling backward. Once the double commits early, your player can pass early to waste your opponent’s double team and create a 4 on 3. Your ballhandler can also reverse the ball early and make the defense “flip” sides of the court”. The new player with the ball can now treat the pending double in exactly the same manner on that side of the floor. If either player does get trapped, he has the previously discussed “square, stance, low, lower” technique and the pivot away to fall back on. The three outlets- sideline, middle and reverse should be available in this event.

MAN TO MAN TRAPS: Some defensive teams like to show man to man, pressure sideline and then double the ballhandler from the front with a ball side defender-usually a forward. This trap generally occurs closer to half court than not. This maneuver can create the additional danger of “over and back”. In reality, these traps are exactly the same as the previously discussed box press sideline trap. The ballhandler can anticipate and see the trap coming. When this happens, he can control the pace of his dribble (chance of pace, stationary or backwards) to make the double commit early. He can also reverse the ball early to “flip” the court. Again, if he does get doubled, he has his “go to” package. The three outlets should also be available on a picked up dribble and trap.

Sometimes the trap comes from behind the ballhandler, but this is very difficult for the defense to time. It first requires the on ball defender to turn his man and then an off ball defender to time the turn and generally come from a long way to double. This defensive maneuver requires a call by the teammate whose defender left to double the ball. That way the ballhandler’s teammate “sees” the double for him.

RUN AND JUMP: This tactic looks like a double but is really a hard switch. The ballhandler should treat this the same as a potential double with strong but judicious handling pace. The run and jump is always less effective if the handler is under control and hard to time. The run and jump is also actually the easiest to split because there is never really a double. The difference here is that the handler should always keep his dribble alive. The defense is still in a form of straight man and an entry will be required to initiate an offense.

If these situations are introduced in the pre-season and practiced and reviewed occasionally during the season, even if a scouting report on a team doesn’t include these tactics, players might be a little surprised but they won’t be unprepared.