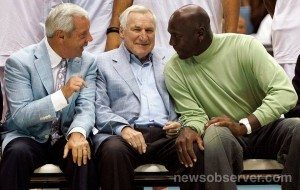 When I was in the 8th grade, my basketball team played on Sunday afternoons against other 8th grade CYO teams. Our coach also had us play against 9th graders from Detroit Public Schools on Saturday mornings at Kronk Recreation Center, known to most as a world renown boxing training center.

We were playing for the Kronk championship and I had missed several easy shots in a tight game. Of course, no one felt worse about this than I. Then, one of our bench guys was vocally critical of my misses in a subsequent timeout. In an instant, our coach kind of frowned at my teammate and just quietly said to me, “You’re O.K.” In one second, with one look and one short comment, that coach pulled everything together.

To this day, it is the best coaching moment I received as a player. The impact it had on me that night and ever since has been immense and I wish that I had remembered that moment more and implemented it more during my career. (By the way, we won and I played “O.K.” the rest of the game).

That’s not to say that I didn’t have many “people” moments during my career but I could have had many more had I been a little less focused on the X and O and business aspects of the game at various times. At the end of the day, all of us juggle in different combinations the three essential skills of coaching: 1) People; 2) Technical and 3) Business.

Before a junior high assistant somewhere scoffs, “Business, Ha”, I’m here to say if you receive a $500 check for coaching, pay taxes and either pay a bill, make a purchase, or put it in the bank, you’re in the business of coaching. The distractions increase at each successive level. When a college coach is working with his current team, he’s recruiting future players. That’s business. Anyone worried at all about keeping his job is “business”. Let’s not kid ourselves; business permeates all levels of coaching to some degree,

Now, I’m not dismissing at all the importance of X’s and O”s or the business end of the equation. I’m just suggesting that a coach can easily lose his compass occasionally and forget, that for the most part, he’s teaching and coaching impressionable young people. Nor am I suggesting that we “can’t get after it” or even be regarded as “tough”. Being tough doesn’t preclude being people oriented.

What I am suggesting this off-season, among all the other areas you are self- checking, is to examine how you balance your different focuses and keep in mind how powerful one coach’s comment was to one thirteen-year old player.