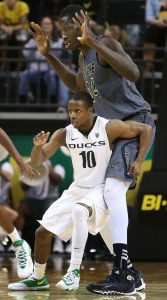 In my playing days, one of my coaches told us that if each of outscored our matchup, we couldn’t lose the game.  Of course, I and every one of my teammates wasn’t going to outscore every opponent every game but as a working concept, it seemed valid to me.  That concept stayed with me a long time both as a player and a coach and to a certain degree became one foundation of how I viewed the game overall and how I coached during games.

At the defensive end, this meant having the best matchups possible on the floor at any given time- adjusting defensive assignments based on which opponents were giving us problems.   At the offensive end, we couldn’t exactly control who was guarding our players.  But, by isolating our players in the post, on the perimeter, in screen/rolls and other set plays, we tried to expose weaknesses in opponents’ matchups.

Granted, it’s a pretty simplistic approach but maybe it’s time to revisit it- especially in light of how statistical thinking in many circles has been become very complicated and cumbersome.  Let’s take a look at some thoughts on Matchup (+/-) analysis:

Matchup (+/-) can provide a quick snapshot of players’ values.  For those wanting a very simple formula, it might be the ticket.   Those wanting a deeper look at individual points for/points against, our next article will address additional thoughts.