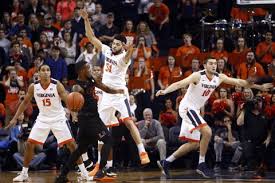 Whenever I watch a basketball game, one of the first things I try to note is how well a team’s defense gets set.  This applies to all situations, but is most difficult after misses and turnovers and against certain teams even after makes.

This is not to minimize the importance of setting one’s defense in dead-ball situations-full court, sideline and baseline.  Obviously in these instances, there is more time to set a defense but even then, it needs to be coached.

No matter the choice of defense, if the defense isn’t set, it will be less effective because the offense will have a better chance to get an initial advantage.  For instance, even in a season where the Virginia Cavaliers are “struggling” (3 straight losses), their signature Pack-Line defense is still extremely difficult to beat.  I would contend that the foremost reason that defense is difficult to penetrate is that the players are “set” earlier than most.  Of course, there are many intricacies to the defense as a whole but a great beginning is the key to rest. Before we go any further, we need to define and characterize the concept:

Once players “get it”, getting set can be a foundation of a defensive system and, for that matter, a program.  While there are many other sexier and appealing facets of the game to players, there might not be a single more important phase of the game for team success than getting set defensively as a team.