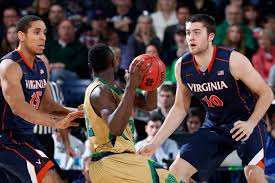 In a previous article, “Pivoting: Basketball’s ‘Stepchild’ Fundamental”, we discussed the various pivots a player has at his disposal, how to drill them and we finished with an important concept for players at every level to master-pivoting out of trouble after a used dribble.

Today, we’ll expand on that and start to discuss the various types of situations in which players get double-teamed and how to combat that defensive ploy. Like pivoting out of trouble, all of our players –no matter what level- need a plan when confronted by the various double teams that they’ll see. How often have you seen a coach (maybe yourself) look at or talk to a player with puzzlement or disdain when they’ve mishandled a double team. The player often looks back at the coach with the same puzzled look. If a team covers these situations in the pre-season and then occasionally reviews them in-season, especially when facing teams that double, there will be a better rate of success against them. Even more importantly, when there is failure, the coach and player have terminology and reference points to discuss what went wrong.

With that, let’s start 90-94 feet away and work into the frontcourt. We’re also going to assume for now that all the doubles that we will discuss are real good doubles and your man can’t simply put the ball on the floor and beat both defenders. In real life, if your player can do that, it’s your call if it’s OK since you know your personnel.

DIAMOND PRESS: One of the toughest double teams to face at all levels but especially for younger players is the first trap on the 1-2-1-1 press-commonly known as the Diamond Press. You know the deal, when your (generally a guard) man catches that first pass, he’s faced with a double in what can be a bad spot on the floor by an opposing guard taking away the sideline and the press point man (usually an athletic forward with some size) taking away the middle. Your player has to pass out of it. What should (can) he do?

Fight to be as square he can with the ball on his hip.. If he’s not square, he’s in even more trouble.
Be flexed low in an athletic stance.
Take the double team down low by getting even lower himself. When the double team goes down low with your man, he can then go back high and pass over them. Generally speaking, he should have 3 options-15 feet or less from him- a sideline option, a middle option (45 Degrees) and a reverse option. Generally, if he hits the sideline or middle options, you’re off on your press break with an advantage. If he reverses the ball, you’re safe for the time being.
There is yet another tactic the man being doubled can utilize occasionally in this situation. Upon the catch the man can pivot away towards his opponent’s baseline. The double teamers, caught by surprise, will follow the offensive player-one on each side. The offensive player can then pivot back through the two defenders and split the double and pass OR dribble himself on the attack.
BEFORE your man even catches the ball, he should avoid the dead corner and try to catch the ball higher (FT Line extended), if possible.
Another deterrent before the catch is to have a bigger man catch the first pass so that he can naturally look and pass over the double (this achieves the same goal as getting the double down low and passing over it). A good strategy here is to break a bigger player up the sideline to the FT line extended to receive the first pass. This can really mess with the first trap because the press point man has so far to go. The receiver can generally make a quick pass to ta middle cutter or longer sideline cutter.

DIAMOND PRESS-DOUBLE ON THE BOUNCE: Sometimes the trap on the diamond press isn’t “on” until the receiver dribbles the ball to the middle. The defensive wing will aggressively force your man to the middle. The double comes from the pressing team’s point man on the bounce to the middle. So, it’s essentially the same trap in a little different spot with perhaps the element of surprise.

The one advantage the offensive man has in this situation is that if he reads the pending double, he has some time and space to avoid it. He should still have his sideline, middle and reverse options when he sees the pending double so he can pass BEFORE he gets doubled. If, however, he does get doubled and has to pick up his dribble, he reverts back to “square, stance, low, lower”. He should again have his usual 3 outlets. He can also still pivot away and back through, splitting the double but this time he’s exhausted his dribble.