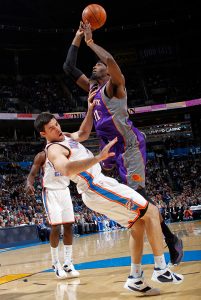 In a previous article, “The True Value of a Basketball Player”, we discussed how John Hollinger’s PER (Player Efficiency Rating) is a great place to start for statistically evaluating players’ overall value.  We also pointed out that the PER system only utilizes box-score stats.  Consequently, PER doesn’t include important offensive concepts such as screen assists, hockey (second) assists, spacing effectiveness, good pass percentage, good touch percentage and the like.  There are numerous trackable actions at the offensive end that can add value to a player’s performance that aren’t found in box-scores.

The newly tracked NBA hustle stats of contested shots, charges drawn ( a missed charge drawn is similar to a missed steal or block), deflections and loose ball recoveries adds four categories to the three box-score stats for a total of seven criteria.  But why stop there?  With the aid of video work, one can track whatever other defensive actions are important in each coach’s system.  (Please read previous Hoop Coach Article, “Do You Have a System for Evaluating Your Players on Defense?”)  Such concepts as defensive containments (stopping the ball on drives), successful secondary rotations, successful hedges, denied cuts, successful transitions, changed shots, and successful closeouts are only a handful of possibilities.

Again, it is your team, your system and your prerogative in setting up your own advanced metrics system.