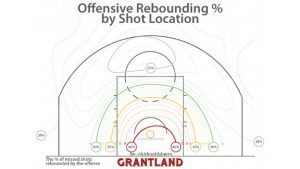 There is an interesting article in the Wall Street Journal entitled “The Playoffs Hinge on a Lost Art: Rebounding”.  The gist of the article  is that the decrease in offensive rebounding is linked to the ever-increasing number of three point shots taken by NBA (really all levels).  This phenomenon shouldn’t be surprising for a number of reasons:

While traditional offensive rebounding is vanishing in some ways, the “new” offensive rebound is of the “long” variety caused by the inherent physics of the longer triple attempt (every action having an equal and opposite reaction).  While that “law” isn’t foolproof in basketball, there is no denying that longer rebounds go hand-in-hand with three point attempts.  The dilemma for each coach is should his team actually “hunt” long rebounds or just get back on D and only take the long rebounds that come their way coincidentally.

Certainly, each coach makes decisions founded in personal philosophies as well as current personnel.  I had to laugh when former NBA player, Chris Dudley, himself a good offensive rebounder was quoted in the Wall Street Journal article, “You want to play to everyone’s strengths.  You don’t want to tell Moses Malone to get back on defense.”  Conversely, one probably wouldn’t always send 4 non-rebounders to the glass.

The article goes on to say that the Chicago Bulls’ current 2-0 series lead over the favored Boston Celtics is the result of superior offensive rebounding.  Not every team is abandoning the offensive rebound- note NCAA National Champs, North Carolina.  Roy Williams is adamant about that phase of the game.

But, the vanishing offensive rebound is a real trend in today’s game and is another way for each coach to use that particular lens to formulate thinking and plans for the next season.