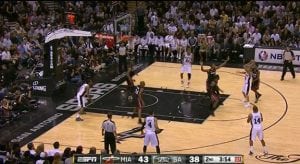 Continuing in our series of floor space and time, today we’ll discuss simple concepts and fundamentals that really are at the heart of how good players and good teams acquire space in effective offenses.  Granted, none are revolutionary in and of themselves but, when lumped together, they should serve as reminders to coaches at all levels that any offensive system, set or play would be far more effective if they provided their players the structure and practice time to master the following skills.

As for ball handling, it’s generally understood that the essence of acquiring space off the bounce is to create separation.  Let’s examine common methods to do so:

As for passing, there are several tried and true tactics that help players acquire space and time.  Again, let’s examine these methods of creating another type of separation:

Coaches and players alike need a complete understanding that as the level of play gets higher, the pockets or gaps shrink accordingly.  Having a highly developed ball handling and passing skill set can only help a player excel, let alone stay competitive as they climb the ladder.