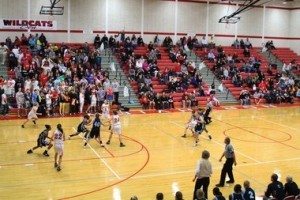 We recently asked coaches to reflect on whether or not their playing rotation might bury players on the bench. Sometimes this is a conscious decision with no apologies and at other times coaches can inadvertently create the very same scenario.

In retrospect, one of the biggest mistakes I made as young coach was always having my starters go against my “second string” in 5 on 5 play once games began. In the pre-season, it was always easy to change practice teams on a daily basis. But once the season began, my subs never got to play with the starters. So when my subs had to play with my starters in live games, it was basically a foreign experience-especially early in the season. After a few years, I started to blend in 2 or 3 subs into the “starting five”. Even then, my subs were only getting token possessions with my better players.

It wasn’t until I stumbled on a practice technique that in a very positive way changed the way my starters and non-starters interacted at practice. One season, my team was structured in such a way that I had an old-fashioned 6th man, who I always brought off the bench first-no matter what. He would sub for any of the 5 starters, including my point guard. No matter who he subbed in for, everyone else just changed roles. So, I decided he always had to practice with the first group-now 6 men.

The next decision I made in conjunction with that move was to have him sub in on his own during any 5-on-5 team play in practice. He could sub in for any player and then that player would sub in on his own for any other player- and so on. Players would sub in every 2-3 possessions depending on how long a segment was scheduled. The result was that those 6 players became my new “first string”. This process also saved time by sparing the coaching staff the jobs of monitoring and executing the substitutions.

I liked how this worked so well that on certain practice days, I would add a 7th and an 8th player (one perimeter and one interior) into the “first team”. Those players would then sub-in on their own. On those days, the result was an 8 man “first string”.

The next process was to choose different 7th and 8th men to rotate in with the first unit. When this is done, you’re really rotating a 9th and a 10th man into your first team reps. This might be too many men for some coach’s rotations but when this is done, those players get reps with your best players and the effect on their frames of mind can be significant.

Of course, when the “second team” gets their reps, one can use the same “sub in on your own” method. Players tend to be sharper when they know that they’re definitely going to get reps and that they have ownership in getting them.

This process is only one of many ways of comingling starters and subs at practice. What are your techniques?  Share in the comments.