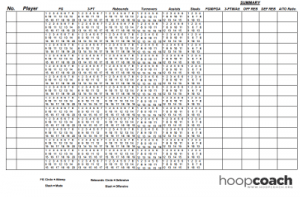 In a past article BLOCKS and STEALS: TRACK the UNSUCCESSFUL ONES TOO, it was pointed out that blocks and steals as raw stats can be very misleading when you don’t take into account missed blocks and steals and the damage they create.

Blocks and steals are only two of what I generally call “empty stats”.  These come in a variety of shapes and forms.

The first category of empty stats is accumulated in one-sided games (wins and losses) and in games after the final result has been determined- sometimes referred to as “garbage time”.

So, the first question for each coach is “Do I break down my team and individual stats into separate categories?”   The second question (if the first answer is ‘yes’), “Is it for my eyes only or do I also share it with my players?”  One reason that some coaches might not want to share this data is they don’t want their players ‘ minds clogged with too much info- “paralysis by analysis”.

The benefit of such a practice, of course, is to get a more realistic view of how a team and individuals perform in pressure vs. non-pressure situations.  The more realistic coaches and players are about performance under pressure, the better they can assess results and continue to work towards improvement.  False self-congratulations can lead to complacency.

Keep in mind that it can work the other way too-as some teams and players will have better results in the close games than in the routs or in post-winning time.  This indicates that teams and players might be “picking their spots” or not ready to play.

The second variety of empty stats falls into the category of stats in which players have interest without the thought of negative consequences.  The block/steal argument falls into this category and we covered that in Monday’s article.

But there are many other similar stats.   A few examples follow.  The one that most folks tune into quite easily is tracking assists/turnovers.  The assist/turnover ratio of players is quoted quite regularly.  But, if a player is recklessly trying a high number of difficult passes, he might notch a lot of assists (on the surface-good) but also chalk up a disproportionate number of turnovers.    On the other hand, another player might be trying NOT to turn the ball over to a fault and end up with few turnovers (good to the naked eye), but he also might not be attacking and adding value to team possessions.

Then, a player could actually be “selfish” trying to accumulate assists and at the same time turn down open shots.  Wilt Chamberlain led the NBA in total assists in 1967-68-ostensibly to answer critics who said he was selfish.  I watched games that season and it was obvious to me that Wilt turned down good shots and passed the ball to teammates with worse looks.  (Remember that every pass he made didn’t result in a score.)  I would argue that many of Wilt’s assists that season were “empty stats”.

Even rebounds can be empty.  For instance, there are players who crash the boards trying to accumulate offensive rebounds at the expense of not sprinting back in transition defense.

Coaches can also create empty stats numerous ways.  Easily the most identifiable is scoring margin.  Coaches who needlessly pile on can warp this particular stat.

There are also coaches at the other end of the spectrum, who are so interested in posting a low points allowed per game that they’ll sit on the ball needlessly to help achieve their goal.

Awareness of not taking stats at face value is very important to coaches and players alike.  Beyond that, the level of tracking, analyzing and sharing empty stats will vary widely.