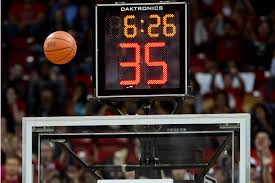 For those readers who play with a shot clock, perhaps the most important usage of points per possession at both ends of the floor is how effective your team is at the end of the shot clock. For purposes of this article, let’s define the “end” as the last 10 seconds. (For those who play without a shot clock, the same principles apply but at the end of quarters. This quarter analysis. in itself, is worth the effort to compute as many games are decided by one or two possessions and any competitive edge that one can get is worthwhile.)

Let’s analyze the end of shot clock possessions in the following checklist:

The keys to more effective performance at the end of the shot clock are simple. Being cognizant statistically is the start, having a basic plan of attack is next but the most important is practicing with a shot clock EVERY time it comes up in practice. There is no luxury of casual possession ends in games, so there shouldn’t be in practice.