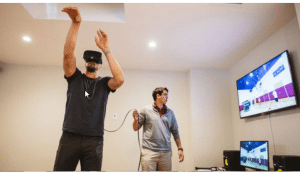 Over the past few years NBA Teams like the Washington Wizards and my Detroit Pistons have been experimenting with use of Virtual Reality to train their players and specifically to improve their Free Throw Shooting. One of the big companies in the market, STRIVR, claims Big improvement after practicing with VR. Being a computer nerd/basketball coach I was naturally inclined to experiment with the idea. Now that I have moved from a head High School coach to a college assistant I have more flexibility for experimenting and filming during practice. My goal is to see if value can be added to a team using consumer grade VR products. Here is what I got so far. (Might want to increase the resolution on the videos by clicking the gear in the lower right.  YouTube throttles it way down.)

Out of Bounds Plays
Below are some very basic clips I have shot using an array of 360 cameras. The first clip is a 360 video shot from the baseline during a baseline out of bounds play. The idea was to create a “first person” view of the action to replicate playing conditions. For example if a cutter came off a screen and was not initially open the inbounder may turn their head and look to another option. 360 cameras give viewers the option of seeing all the action, so a player could see who was open, why they were open and where they were open by modifying the view.

Improving Free Throw Shooting
I experimented with using a 360 camera attached to a head rig while a player shoots free throws. I am pretty sure this was a bad move. When you have a guy that looks at the ball while dribbling before taking his free throw it gets pretty “jerky”. I reached out to a Video Analyst with the Washington Wizards and he was cool enough to recommend using a tripod and gave me a few tips for creating the illusion of a first person view. I have not tried that yet but will soon.  I had a kid watch the video below and pretty sure I gave him motion sickness.

Just Generally Taping Practice
This is footage from my youth camp at the my old high school coaching job. I just set the camera up in the middle of the floor during our station work and posted the video to our team website. I figured parents could find their kid and watch them at camp. Might be a good way for coaches to check for things they missed during practice.  Notice the “blind spot” at the bottom of the video.  You can move the view up to get rid of it.

As the season progresses I hope to answer the following questions: