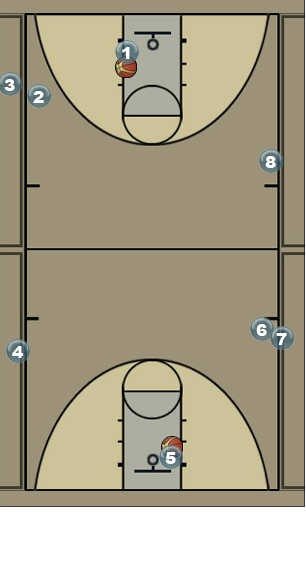 Full court passing layups is a good drill to stress leading a player with a pass along with catching on the move and finishing at the basket.  Great for young kids.  Good warm up for older players.

Line your players up like the image to the left.

Two players(1 and 5) start with a ball, one under each basket.  On the whistle, both players outlet to the near wing while running down the floor toward the far basket passing to the players on the sideline and receiving a return pass culminating with a layup on the far end. For example, the passing pattern for 5 would go:

The player that makes that assists on the layup rebounds the ball and starts the same procedure up the same side of the floor.

See the animation below for a much better explanation.