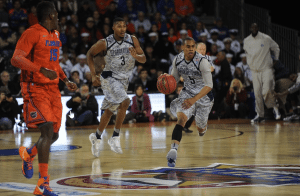 Would You Rather Score or Have a Good Possession?

Obviously, the answer is both but realistically if you have 70 possessions in a game, for instance, you’ll never score on all of them.  Even scoring on half of them is acceptable very often.  But while it’s impossible to score on all your possessions, in theory it’s possible to have a much higher percentage of good possessions than scores.

This thought recently came to the forefront while watching a number of both NCAA and NBA games early this season.  For some reason, I have found myself saying out loud, “bad possession” when I witnessed a possession that started and ended poorly-with very little chance of a score at the end.

Granted, bad possessions sometimes yield points.  We’ve all been on both sides of a possession in which a player makes a great play, someone “throws one in”, a defender or ref bales out an offensive player in a tough spot and any other number of oddities that can happen when ten players and 2 or 3 refs are packed into a small area and moving at the same time.

Like a lot of other things, we all pretty much know a good possession when we see one but there are universal elements:

What does a “good” possession mean to you?  Let us know in the comments below.