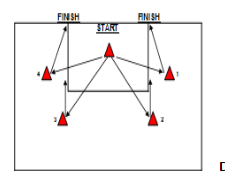 Cone Defensive Slides– Start by sliding to the first cone, advance forward then slide to the next cone, repeat until the course is finished. 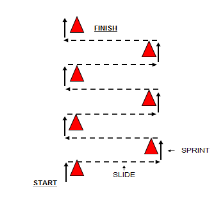 with a sprint to the middle cones, defensive slide to one of the outer cones, then slide to the opposite outer cone, and then back to the middle.  Finish with a backpedal to the finish cone.